The following information is from a data report generated by JBS International, Inc., a Project Career partner, regarding students that have been enrolled in the program during the time period March 14, 2014 through October 13, 2016.

Students participating in the program were asked to self-report the severity and other information regarding their Traumatic Brain Injury (TBI). Surprisingly, 55% (N=97) of these students (who are all enrolled in either a two- or four-year college program) reported their TBI as severe. This was based on the number of days in a coma and other determining factors, as provided to each student. Another 21% reported a moderate TBI. Likewise, 21% said their TBI was mild. The severity of the remaining 3% is unknown. 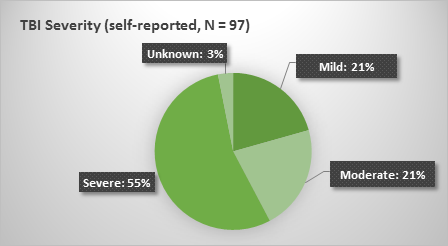 The most frequent cause of the TBI was listed as a motor vehicle accident (35%). Sports-related injuries were responsible for 18%. Combat or an IED (improvised explosive device) accounted for another 16%. A fall was cited as the cause for 12% of the students. An assault or a gun shot wound was indicated by 6%. The remaining 13% were due to some other cause.